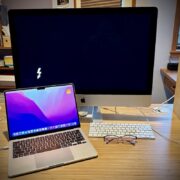 Apple makes it easy to move data between Macs. You can send files via AirDrop, attach them to an email message, put them in a Messages conversation, turn on and connect via File Sharing, or use a file-sharing service like iCloud Drive, Dropbox, or Google Drive as an intermediary, to name just a few of the more obvious approaches.

But what if you have a lot of data—say tens or even hundreds of gigabytes—to transfer from one Mac to another? The techniques listed above might work, but we wouldn’t bet on it. If you had an external drive with sufficient free space handy, you could copy all the data to it from one Mac and then copy the data from it to another Mac. To cut the copy time in half, try Target Disk Mode instead. You may even be able to use Target Disk Mode on an older Mac to transfer an account with Migration Assistant when setting up a new Mac.

What Is Target Disk Mode?

Target Disk Mode is a special boot mode for Intel-based Macs and an option in macOS Recovery on Macs with Apple silicon that enables one Mac to behave like an external drive for another Mac. Target Disk Mode is nearly universal, easy to set up, and one of the fastest methods of moving files between Macs. Let’s unpack that statement:

If either Mac has macOS 11 Big Sur or later installed, you’ll need to connect them with a Thunderbolt cable—it’s fine to use Apple’s Thunderbolt 3 to Thunderbolt 2 adapter for connecting newer and older Thunderbolt-capable Macs. If both Macs are running an earlier version of macOS, you can use Thunderbolt, USB, or FireWire, depending on the available ports. (Note that the Apple USB-C Charge Cable that comes with the Apple power adapter doesn’t support Target Disk Mode, so if that’s the cable you were planning to use, sorry, but you’ll need to buy a real Thunderbolt cable.)

To put an Intel-based Mac into Target Disk Mode for copying data, follow these steps:

The process is somewhat more involved for Macs with Apple silicon, where the shared drive or volume appears like a network volume:

Although it’s not something you’ll use every day, Target Disk Mode is one of the unsung innovations that has made Macs easier to use for decades, and it’s well worth keeping in mind whenever you need to move lots of data between machines.

LastPass Security Breach: Here’s What to Do

If Your Holiday Gift Was a Tech Device, It’s Time to Change the Password!
Scroll to top