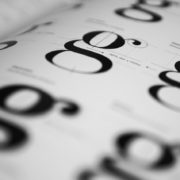 Back in the 1980s, the thing that set Macs apart from PCs more than anything else was the Mac’s support for different fonts. Over the years, font formats and how you work with fonts have changed, though things have remained fairly stable since Mac OS X became mature. However, despite the fact that there are oodles of fabulous fonts available for free download (at least for personal use), many people don’t realize just how worthwhile it can be to go beyond the fonts that ship with macOS.

Getting and installing new fonts is easy. You’re likely to find fonts in one of two font formats: TrueType and OpenType. TrueType fonts generally have the filename extension .ttf or .ttc, whereas OpenType fonts may use the same filename extensions or use .otf. macOS supports both, and both work fine, though if you have a choice, note that professional designers prefer OpenType.

When you download a font, you’ll usually get a Zip archive, that, when expanded, includes the actual font file (the one with the .otf, .ttf, or .ttc extension) along with a ReadMe or license file. (If the Zip archive doesn’t expand automatically, double-click it.) You can install fonts into Font Book, Apple’s bundled font management utility app, in three ways:

If you’re installing just one or two fonts, go with the first method, since it’s the easiest. However, if you’re installing a bunch of fonts at once, either the second or third approach will let you avoid lots of repetitive clicking.

Once installed, fonts should be available to most apps right away. If you had a font panel open in an app, you might need to close and reopen the panel before newly installed fonts will appear. Or just quit and relaunch any apps that don’t see the new fonts. If all else fails, restart your Mac to ensure that everything recognizes the new fonts.

That’s it! Now that you’re up to speed on installing fonts, have some fun finding and using fonts that will give your documents added personality.

Make the Most of the iPhone’s Panorama Mode

Mark and Navigate to Arbitrary Locations in Maps
Scroll to top